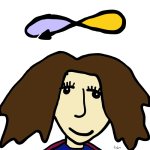 “If someone gives you negative energy, you give back positive, affirmative energy such as forgiveness. This is the giving within for-give-ness.” –Michael Bernard Beckwith

What do you think of Stargirl’s response to Hillari Kimble at the end of chapter 31, the point where Hillari has just slapped Stargirl and then flinches, expecting to be hit in return? Instead, Stargirl lightly kisses her, what turns out to be her last act at Mica High. For me, I want to suspend any disbelief I may hold about such an action coming from a teenager and simply embrace it, deriving as much meaning from it as I can. And in that light it’s a case of responding to a negative, angry act with a positive, loving one. If I take nothing else from this book, that’s the message I want to take, a lesson I want to continually practice.

In support of this, I offer you this blog entry written by David Spangler. David is a widely respected lecturer and author (and even wrote about my kindness classes in his book “Blessing”). He is also sometimes seen as a controversial figure, believing and talking as he does about what he calls the “inner worlds,” a place inhabited by beings with whom he is able to communicate.

His blog posting is mostly David quoting a letter he received from his friend Ian Doig. It is really that letter that I am encouraging you to consider, especially in conjunction with this week’s Kind Action suggestion to see yourself as a conduit for kindness. And whether or not you believe in things like inner worlds, dowsing and the like, I hope you will take some time to consider the value of contributing to positive energy.

Enter a positive-sounding word to see what fun idea you find: